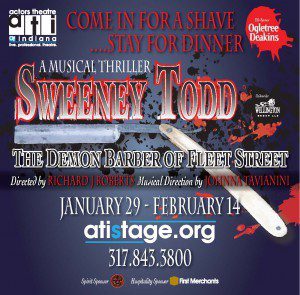 Customers of these participating stores that spend $50 or more will receive two vouchers for every $50 spent in store from January 20, 2016 through February 13, 2016. Each voucher is redeemable for one ticket.  Show your support at your favorite local businesses while getting the opportunity to see a great show!

A tasty, thrilling, theatrical treat, this Stephen Sondheim ground breaking musical has simultaneously shocked, awed, and delighted audiences across the world. Winner of 8 Tony® Awards, this is an infamous tale of an unjustly exiled barber, returning to London to seek revenge on the judge who framed him. A lush, operatic, and full of soaring beauty, pitch-black comedy and stunning terror, it’s one of the signal achievements of the American musical theater of the last fifty years!

Based on the Victorian penny-dreadful The String of Pearls, this thrilling tale was transformed with music and lyrics by Stephen Sondheim. Sweeney Todd, after being wrongly imprisoned, returns to London to resume his barber business above a struggling  pie shop owned by Mrs. Lovett. The two team up to right the wrongs they have experienced, and offer audiences a exciting tale of revenge.

Reimagined for the silver screen in 2007, the film adaptation of the musical starred Johnny Depp as Sweeney Todd, alongside Helena Bonham Carter as Mrs. Lovett.

Sweeney Todd, presented by Actors Theatre of Indiana is at The Studio Theater at the Center for the Performing Arts, 4 Center Green, Carmel, IN 46032.
For ticket information call the box office at 317-843-3800.
For show details visit http://www.atistage.org/sweeney-todd/

*Vouchers are subject to availability and recipients must redeem by calling the ticket office to schedule the desired time/date. Must present voucher in person. Seating is at the discretion of ticket office staff. Voucher is non-transferrable. Tickets redeemed from vouchers are non-exchangeable.