Founded in 2011 by Indiana native Talbott Sumners, Polleo Systems provides cloud computing and strategic technology services for small and medium-sized businesses. The company, which is also opening an additional facility in Orlando, Fla., was recently named a 2013 ‘TechPoint Mira Awards’ finalist in the category of IT/Tech Service Excellence and Innovation. 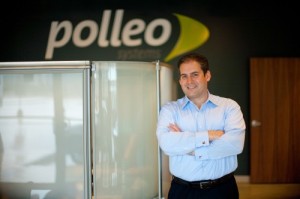 “The decision to continue our growth in Indiana is highlighted by the state’s commitment to small businesses and the opportunities that the state makes available to support our development,” said Talbott Sumners, president of Polleo Systems. “We feel that Indiana welcomes the high-tech community and companies like Polleo Systems.”

The Indiana Economic Development Corporation offered Polleo Systems, Inc. up to $300,000 in conditional tax credits and up to $40,000 in training grants based on the company’s job creation plans. The city of Carmel also supports this project.

“We are thrilled about the expansion and addition of new jobs at Polleo Systems’ current facility in Carmel City Center,” said Carmel Mayor Jim Brainard. “The city realizes a long term gain through local investment and job creation in redevelopment areas such as City Center. Polleo Systems’ decision to invest and expand in this location demonstrates exactly the type of economic impact the city anticipated for Carmel and the region.”

The positions created will include new system engineers, account executives and technicians. Interested applicants should email their resumes to employment@polleosystems.com.