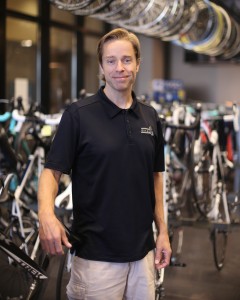 It was a quick spin around the block on their kid’s bikes that first motivated Tom and Nancy Revard to get into cycling. That “quick spin” turned into a couple of hours and a family obsession was born.  Tom and Nancy soon got the whole family of eight involved in cycling and eventually opened the family business, The Bike Line, in 1979.  Nearly 20 years later, the Revards opened their current Bike Line Carmel location in 1997.

Today, The Bike Line is owned by Charlie, Bill and Jimmy Revard, and specializes in Trek Bicycles, of Waterloo, Wisconsin. It is also the largest dealer of Zipp wheels in the area.

“You don’t have to be a professional rider to enjoy professional-quality equipment, ” said Bill. “It’s a rewarding way to get more enjoyment and performance out of your sport. It makes for a better, higher intesity workout also.”

Trek being one of the biggest bicycle manufactures in the world, they completely believe in their bikes.  This is one of the many reasons why Bill and his brothers specialize in them.

“From day one The Bike Line has been a Trek dealer. Trek is the best at standing behind their products, we honor that because we stand behind out customers one hundred percent,” said Bill.