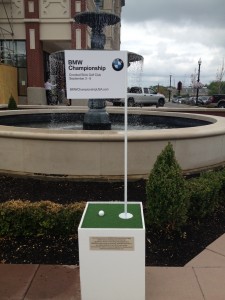 18 BMW Championship pin flags are hidden across Indianapolis and Carmel. By taking a picture of any of the flags and tweeting it to @BMWchamps using the hashtag, #BMWPlacethePin, you will be entered to win daily ticket prizes. See what you could win here.

The winner of the contest will be chosen randomly and will be announced on Friday, August 31st. Happy Tweeting!